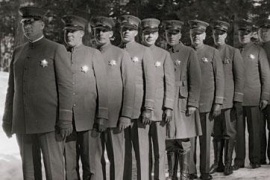 It was called the “greatest mobilization of police in the city’s history.” But the event that brought out hundreds of Hartford-area police to Keney Park was not a riot, not a strike–it was the November 15, 1952 concert by Paul Robeson.

The controversial actor and singer had played to 3,000 Hartford people back in 1945 at Bushnell Memorial Hall. This time, however, Robeson ran into stiff opposition as his supporters attempted to secure Weaver High School across from the park (now Martin Luther King Jr. Elementary School). The performance was a benefit for the progressive electoral efforts of the Connecticut Peoples’ Party. 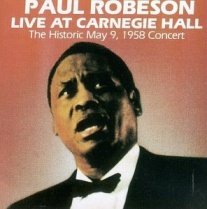 Robeson was no stranger to the Hartford area. He and his family had bought a home in Enfield known as “The Beeches.” Robeson’s wife Eslanda enrolled in courses at the Hartford Seminary and was a featured speaker at the meetings of local organizations. Robeson’s long history of engaging in fights for racial equality, workers’ rights, and detente with the Soviet Union (decades before it became official U.S. policy) followed him to Connecticut.

What infuriated his detractors most was Robeson’s refusal to condemn the Communist Party or to state whether or not he was a member. “Why do you not stay in Russia?” he was asked. Robeson replied: “Because my father was a slave, and my people died to build this country and I am going to stay here and have a part of it just like you. And no fascist-minded people will drive me from it. Is that clear?”

His views made him an especially important target for those who had a stake in the status quo. He was hounded by the House Un-American Activities Committee (HUAC), spied on by the FBI, and denied a passport to tour abroad. His life was frequently threatened and his effigy was burned by the Klan. His every move made negative headlines at a time when Black people were otherwise largely invisible to the news media. “The persecution of Paul Robeson by the Government has been one of the most contemptible happenings in modern history,” wrote W.E.B. Du Bois.

The Hartford controversy stemmed directly from the August, 1949 outdoor performance that Robeson was scheduled to give in Peekskill, New York. Stirred by inflammatory press reports, the event turned into a wholesale

attack on concertgoers by hundreds of American Legion-led thugs. Rioters pulled men from their cars and beat them; then they smashed and overturned the cars. The rioting went on for three hours before the state police arrived. No arrests were made. A second Peekskill concert was held two weeks later. Under heavy guard by union members and WWII veterans, Robeson defiantly sang. Leaving the concert, however, meant attendees had to run a gauntlet of bottles and stones from thousands of protestors who included, according to eyewitnesses, the police themselves. More than 85 scheduled Robeson concerts around the country were cancelled in the next year due to political pressure.

In Hartford, conservative veterans’ groups lined up to oppose the Robeson concert. City Council member John J. Mahon led the political effort to stop Robeson. Even the local teachers’ union petitioned the Council and the Board of Education to rescind the Weaver High permit.

The Hartford newspapers played a significant role in red-baiting Robeson and playing up the fears of violence. Early in the controversy, one daily ran a front-page article entitled “Robeson Among Guests at Red Embassy.” Letters to the papers warned Hartford people not to be “liberal with our freedom of speech when it comes to Communism.” When provocative questions from a local reporter angered Robeson, that, too became a story. “Robeson Enraged as Party Membership is Questioned” read the headline. Robeson’s anger was eloquent and pointed. “The white ruling class of America doesn’t like Negroes who stand up and talk back and fight for their rights,” he told the reporter.

In the end, Robeson did sing at Weaver High School, to an auditorium packed with 800 people. The audience called him back for six encores.