Hartford’s Wild West fans and kids of all ages had to make a hard choice one hot summer day in 1899. They could travel to the park on Albany Avenue to see Buffalo Bill Cody’s show with “hundreds of Indians in war paint and feathers,” complete with a buffalo hunt and staged battles with white settlers.

Or, they could take the trolley to the city’s south end to watch Louis Sockalexis, the first American Indian to play major league baseball. Two thousand Hartfordites witnessed “Sox” hit three times that day at the Wethersfield Avenue ball park. With his help, the Hartford Indians, as they were known, beat the Providence Clamdiggers 4-3.

Louis Francis Sockalexis was a Penobscot Indian born in Old Town, Maine. He demonstrated extraordinary athletic ability as a teenager and played a variety of sports at Holy Cross College and Notre Dame. But baseball was his game, and he was recruited to the National League’s Cleveland Spiders in 1897. Sockalexis played with greats like Cy Young and hit .338 in his first 60 games, leading Hall of Famer John McGraw to call him the greatest natural talent he had ever seen.Sockalexis spent two full seasons in the big league with Cleveland.

Separated from his tribe and the forests of Maine, he became an early victim of hard drinking and fast living, and a target of frequent hostility and racism from crowds and players. On road trips through Baltimore, Brooklyn and Boston, Sockalexis endured bigoted insults beyond the normal taunting his teammates received. He responded to racial prejudice with restraint and dignity.

Early in the 1899 season Sockalexis had been released from Cleveland after his performance suffered, due in part to an alcohol-related injury. He was immediately picked up by the Hartford team while they were in New York playing the Rochester Broncos. Both clubs were part of the Eastern League, a minor league that included two Canadian teams. But for Sockalexis, it was still baseball.

At his first home game in Hartford on May 29th, 1899 a local sports writer described Sockalexis 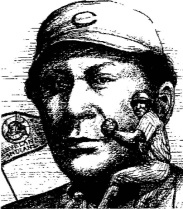 as “a tower of strength in left garden. He is a swift, accurate thrower as he fully illustrated in the Rochester game, when he nailed Charlie Cavelle at the plate from deep left field. Cavelle is a fast base runner, which makes the play more remarkable. At the bat, ‘Sox’ has not superior in the league. He has made many of the big pitchers in the National League look anxious.” That day, the Indians beat the Springfield Ponies 6-1.

For the people of Hartford, knowledge of Native Americans was second-hand. Only four American Indians were listed in the city’s 1900 census. Local folks relied for their information about Indian culture on “dime novels” featuring white heroes like detective Nick Carter and Buffalo Bill Cody (portrayed as a schoolboy capable of killing and scalping “injuns.”)

Indians faced a reality harsher than the penny dreadful fiction sold at Hartford newstands. The year Louis Sockalexis landed in the city, Congress gave railroad companies unrestricted right of way through tribal lands. This capped off a decade of genocidal actions that included the Wounded Knee massacre, abrogation of land treaties, and compulsory schooling of all Indian children.

Baseball was segregated by this time too. Although once there had been integrated professional and amateur teams, the Sporting News reported that by 1891 not a single African American was “employed in the profession, either in a major or minor league.” Black ball players were forced to create their own opportunities, like the Cuban Giants, a barnstorming club that played anywhere they could. One incarnation of the Giants briefly made Ansonia their home in a Connecticut league, but were expelled for “misbehavior.” As the Sporting News described it, “an African who attempts to put on a uniform and go in among a lot of white players is taking his life in his hands.”

Sockalexis had to put up with racist stereotypes while in Hartford, including very bad “Hiawatha” parodies  from local sports writers. But there is no specific report of racist treatment from the Hartford fans or “cranks” as they were called at the time. The crowds apparently wanted him to succeed, and Sockalexis showed flashes of his brilliant skills while playing here. In one game against Providence, he caught a long fly and threw it from deep left field to first base. “No one was expecting the ball there, and it was not caught,” wrote an exasperated reporter from the Hartford Daily Times.

The high point for Louis Sockalexis came in a home game against Springfield. Although it was a weekday, more than 4500 Hartford cranks showed up to the south end field, filling the bleachers and free stands, perched on the roof of the box seats, circling the field. It reminded older fans of Hartford’s brief National League days with the Dark Blues. In an early inning the opposing pitcher had walked Sox, afraid of what his bat could still do. But the next time he was up, Sockalexis reached for the ball and connected. “With a mighty swing he pounded the sphere, sprinted off to the West, while Warriors Shindle and Kelly galloped to the plate. A yell smote the forest.” Sockalexis drove in four runs that day and was given “tumultuous applause for his work with the stick.”

The young Indian had not beaten his alcohol addiction when he moved to Hartford, however. Although he had promised his manager that he would reform, temptation was all around. More than 180 saloons crowded Hartford streets at the time (two dozen on Front Street alone), stocked by four local breweries. There were twice as many bars as all the local churches and temperance groups combined. By June, published stories circulated that Sox was “working the night-owl racket.” The last account of him admitted that “the Penobscot kept bad hours and as a result when he went after a ball his movements reminded one of a messenger boy on an errand with a copy of “Nick Carter” in his hand.”

After Hartford, he took another step down, to the Connecticut State League. Recruited by a team in Bristol, Sockalexis was quickly stolen away by Roger Connors’ Waterbury club, where he successfully finished out the season and helped the team reach second place.

By the next spring, it was reported that Louis Sockalexis was back in Hartford, a vagrant who frequented Front Street taverns. His biographer Brian McDonald says he worked for a time in some capacity at Colt Firearms. He moved closer and closer to home, first to Massachusetts, then to Maine, still involved with baseball as a player, an umpire, or as a coach and mentor for aspiring young Penobscot ball players. He died in 1913 on Christmas Eve while working as a logger in Maine.

Ira Thomas, a major league catcher who started his baseball career in Hartford, would tell his favorite story about Louis Sockalexis while coaching rookies during the pre-season. Once, Thomas said, he watched an opposing player hit to right field. The ball was hidden by an infield shadow before sailing into the sun. No other player could track it, Thomas continued, but then Sockalexis was seen to “take a wild rush backward [and] jump frenzily into the air.” According to Thomas, Sox landed with an English sparrow in his glove hand.

Although his career was brief, Louis Sockalexis deserves to be remembered, both for his accomplishments and the legends that grew up around him.