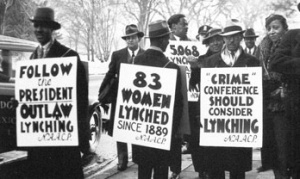 What was the murder of Trayvon Martin if not a lynching?

The definition of the word is clear: “an extrajudicial execution… in order to punish an alleged transgressor, or to intimidate, control, or otherwise manipulate a population of people.”

Every lynching has its lynch mob. George Zimmerman benefitted from a virtual lynch mob, first created when the “Stand Your Ground” law was passed in 2005 by the Florida state legislature. Every lawmaker who voted for it, and every TV watcher who rooted for Zimmerman is part of that mob.

Lynching is as American as cherry pie. It continues to be the “strange fruit” that Billie Holiday first sang about in 1939:

found fertile soil in Connecticut. Well, not quite.

There have been 4,743 documented lynchings in the United States between 1882 and 1968, according to statistics first collected by the Tuskegee Institute. Black men have been the overwhelming target, but black women and children have been lynched as well. Florida ranks eighth, with 282 lynchings; 90% of the victims were Black.

Connecticut is one of only six states that has no recorded lynching deaths. But while we don’t appear on that shameful list, our state had its share of near misses:

–William Morrison of Bridgeport was accused by a mob of attacking an elderly white woman in 1899, but the local authorities prevented his lynching;

–Frank Smith was saved from a South Norwalk lynch mob in 1907 when he was charged with molesting a child;

–William Taylor was almost lynched in 1912 when a crowd tied his hands, placed a noose around his neck and dragged him through the town of Derby. The crowd took him to the home of the alleged victim, a young white woman who denied that Taylor had assaulted her. A judge later nolled the charges against the mob’s ringleaders;

In each one of these cases, white Connecticut citizens were prepared to take the law into their own hands, stopped only when legal authorities intervened.

The anti-lynching movement was organized throughout the U.S. in response to this epidemic of violence against African Americans. In church halls and union halls, Hartford people were inspired by visits of famous civil rights advocates who came to the city in order to take on the lynching epidemic, including Booker T. Washington and James Weldon Johnson.

Local Hartford committees, with names like the Anti-Lynching Crusaders and the Harriet Beecher Stowe Club, organized to condemn the practice. The city’s own Mary Townsend Seymour, known for her work in civil rights, women’s suffrage, and labor organizing, also took up the cause. In 1919 at the Center Church in downtown Hartford, she decried the murder of African Americans including at least seven WWI veterans who were lynched in their uniforms by howling crowds.

Hate speech is protected by law, but the shooting of unarmed youths should not be. “Stand Your Ground” is an ugly enabler of homegrown terrorism. The Southern Poverty Law Center (SPLC) points to a sharp rise in hate groups in over the last three years, as well as more than 7,000 hate incidents a year recorded by the U.S. Department of Justice. Immigrants, Muslims and lesbian and gay people are becoming more frequent 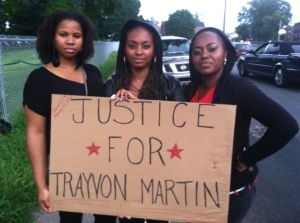 targets. The SPLC’s Carrie Kilman warns that “regardless of the perpetrator’s intent… hate symbols still have the power to signal violence – a power that not everyone recognizes.”

“Stand Your Ground” is an attempt to intimidate our neighbors and co-workers with lawless aggression, the legacy of centuries of racist law, as deadly today as it was in the early 1900s.