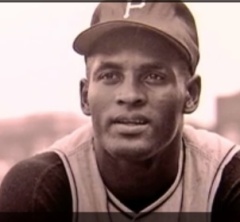 Why would a baseball star who died more than forty years ago have such a great impact on Hartford people? Maybe because Roberto Clemente was much more than a ball player.

His stats are in the record books: World Series MVP, All-Star player, Gold Glove winner, 3,000 major league hits. But Clemente was also a civil rights activist whose life was grounded in the struggles of poor and working people. He is honored in Hartford each year on the date of his tragic death, December 31st, by those who are proud to carry on his tradition of fighting for social and economic justice.

Roberto Clemente Walker was born in 1934 in San Anton, Carolina, Puerto Rico. He played professional baseball from 1954 to 1972 almost exclusively for the Pittsburgh Pirates. His career “spanned the entirety of the black freedom struggle from the Montgomery bus boycott to the urban ghetto rebellions; from Rosa Parks to the Black Panthers,” sports writer and activist Dave Zirin reminds us.

Clemente died in a plane crash on December 31, 1972 while on a relief mission to Nicaragua, after learning that the dictator Somoza was hoarding donations meant for earthquake victims.

After news of his death, hundreds of Hartford fans gathered at City Hall to remember him. Eugenio Caro, Mayor George Athanson, and the mayor of Kingston, Jamaica (who was in town for another event) spoke at this memorial. A short time later, the Puerto Rican Businessmen’s Association organized a scholarship and awards event in his name. Orlando Cepeda, Red Sox hitter and homeland compatriot, came to Hartford to receive the group’s recognition. The ever-present Bill Savitt, jewelery store owner and master self-promoter, took out newspaper ads to urge people to donate to the Red Cross earthquake relief fund in Clemente’s name (Savitt’s semi-pro Gems frequently invited Negro League and international baseball teams to play in the city).

While he was still alive, Clemente’s civil rights work was not widely publicized. But now we know that he forced the Pirates to postpone their 1968 season opener with the Astros on the day before Martin Luther King’s funeral. As the decision was being made, the players were polled on the gesture. “If you have to ask, we do not have a great country,” Clemente replied.

Clemente organized his black and Puerto Rican teammates against being forced to stay on the team bus at meal time while the white players ate in restaurants. He defended the first black Pirate, second baseman Curt Roberts, against racist slurs from white members of his own club. In response to a reporter’s question, Clemente explained that “I didn’t like some of the things they said to Roberts, so I said some things they didn’t like.” Likewise, he supported Athletics player Vic Power, another Puerto Rican, when he was arrested for buying a Coke from a whites-only gas station. And without any fanfare, Clemente supported the breakfast programs run by the Black Panthers.

A permanent monument to Roberto Clemente can be found in Hartford’s Colt Park, just behind the backstop at Clemente Field.