Government spying on Hartford residents is not new. It dates back at least to 1919, when police and the U.S. Department of Justice secretly gathered information on–and infiltrated the ranks of– the Industrial Workers of the World (IWW or Wobblies) in Connecticut cities. In 1923 the Hartford FBI office passed information to the Waterbury Police in an effort to stop famed anarchist Carlo Tresca from a lecture appearance. In 1952, a confidential FBI informant spied on singer and activist Paul Robeson at a private party in a Hartford home on Albany Avenue. From 1956 to 1963 the feds spied on Malcolm X each time he came to the city.

No, there’s nothing new about Big Brother. What’s new is the extent of the covert intelligence that was gathered on the Hartford chapter of the Black Panther Party (BPP) starting in 1969. There are now 1582 pages of formerly classified FBI files that were released in January, 2014 through the Freedom of Information Act, thanks to Trinity College professor Jack Dougherty. These documents expose just how paranoid the Feds were.

SPYING ON THE HARTFORD BLACK PANTHERS

The files tell us many things about the local Panthers, but they also tell us much about mindset of the agents collecting the data:

–A minimum of five “confidential sources” spied on citizens in Hartford and New Haven on behalf of the FBI in 1969. They were listed only by their code designations. For example, “NH T 3” was described as a “highly placed sensitive source.”

–We now know that when Panther members Charles ‘Butch’ Lewis and Walter ‘Rap’ Bailey were helping a group of Charter Oak Terrace mothers, the FBI sent “Urgent” teletype memos to J. Edgar Hoover himself. The agents feared “possible racial violence” as the Moms demanded action on the hazard to children posed by the Park River.

–The files show that on May 1, 1969, federal agents were spying on the Hartford Panthers as the group held a picket line in front of the Federal Building on Main Street. Along with other BPP chapters across the country they demanded the release of Huey P. Newton, founder of the Party, who was serving a prison sentence in California for killing a cop (the conviction was overturned).

–From other FBI files, we know that the Party’s national newspaper, The Black Panther, was considered so dangerous that the FBI recommended to local police departments that distribution of it be disrupted. Hartford Police obliged, and young Panthers like Gregory Green of Clark Street were harassed and arrested again and again for selling the paper in downtown Hartford.

–We know that an informant reported on Butch Lewis’s recruiting attempts, including a meeting he held with 60 teenagers in Bellevue Square. The teens were shown a film which, according to the informant, showed “the types of explosives” used by the BPP, “how women are used” in the organization, and how they were trained to “seige [sic] police stations.”  None of this was accurate. The film, Huey, introduced viewers to the history and philosophy of the Party. You can find it on YouTube; it has 451,000 hits.

–As more members of the Hartford Black Panthers were identified (it wasn’t hard to do; they were hard to miss at public events in their berets and leather jackets), the Washington FBI was sent details about where they lived (“with his mother Lillie on Pliny Street”) and where they worked (“at Stop and Shop on Albany Avenue”). The last sentence in each memo was the same: consideration should now be given about placing this person on “the Security Index.”

This illegal spying was led by FBI Special Agent John A. Danaher, Jr., a local boy who made good. His father had been a U.S. Senator and a federal judge. The Danaher family could often be found in the “Society” section of the Hartford newspapers. Former Panther leader Butch Lewis recalls that Danaher picked him up for questioning several times a month while the BPP was active in Hartford.  When Danaher retired, he took up needlepoint as a hobby.

THE ARMY SPIED ON US TOO

It wasn’t just the FBI that violated our constitutional privacy rights. The U.S. Army’s 108th Military Intelligence group, which operated from 1946 to 1972, kept a secret office in Hartford. Plainclothes Army spies identified as many anti-war and civil rights activists as they could find. Each person was given a number. The data included details on a subject’s sex life or financial status. That information was sent to military computers in Virginia and Maryland. All of it was shared with the FBI and the CIA.

The 108th had a full operation in Hartford and New Haven for at least four years from 1968 to 1971. It amassed 62,400 pieces of information on local individuals, and 21,600 more on organizations. The Army gathered data through burglaries and infiltration of social action groups. A U.S. Senate investigation found that the Army saved this information in case troops were deployed into the cities to quell disturbances. The so-called “black list” was designed to aid the military in finding political activists in times of unrest. Some of the Hartford FBI files were marked with the initials MI (military intelligence), indicating how the two groups of spies shared information. 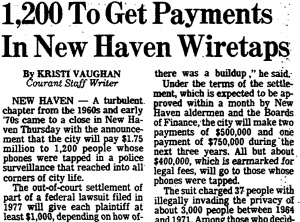 AND THEN THERE WERE THE WIRETAPS

In January, 1977 a New Haven newspaper exposed a massive political wiretap operation in Connecticut. At least 3,000 Connecticut people had their telephones tapped. New Haven Police set up the taps, but argued the FBI had okayed the project. Activists sued and in June, 1984 a settlement awarded almost $2 million to 1,238 people. Connecticut’s telephone company SNET paid out an additional $150,000 to the defendants. The FBI congratulated itself on the effectiveness of the secret operation known as COINTELPRO (counter intelligence program). The agency’s use of surveillance and dirty tricks caused disruptions within the ranks of the Panthers (and other left groups), ultimately hastening their demise.

NEXT– Part Two: The work of the Hartford Panthers.