It was a warm Sunday night in Hartford on August 7, 1932. Several dozen men and women–exhausted, dirty, hungry– trudged into the city after a hard trip from Washington DC. They had just made history. Along with 45,000 other military veterans and their families they camped for several months to press the government for aid. Specifically, they wanted the immediate release of cash payments (the Bonus) promised to them after World War I. They failed: the so-called Bonus Army could not compel Congress to vote for the pay. But the fight was far from over.

These were the Depression years, with a 25 percent jobless rate and two million of men and boys walking the roads or hopping the freights in search of work. Many of the unemployed were workers-turned-soldiers who had expected jobs when they returned from European battlefields.

It’s a historical fact we don’t care to acknowledge: when workers are hurt by economic crises, veterans hurt more. As far back as the Revolutionary War, veterans have had to mobilize, and sometimes riot, in order to get paid. At the turn of the 20th century, Civil War veterans were still being found dead in Connecticut’s forests and alleys. Coroners cited alcoholism or exposure, but often the real killer was society, neglecting its own. By1932 the calls for social insurance, health care, and guaranteed income were impossible to ignore.

Navy veteran Harry Bendell of Hartford was first to call for an outdoor meeting of local veterans to join the growing protest in Washington. Local supporters donated food, gas, oil and tires to help them on their way. Cash donations allowed some unemployed workers to register their cars so they could be legally driven. Vets collected money at local baseball games and set up a headquarters across from South Green.

The Bonus had broad public support. Even though the 1924 law passed by Congress stipulated that veterans could not receive their bonus payout until 1945, across the country they were demanding it immediately. The veterans’ rationale was persuasive: Soldiers had been paid 33 dollars a month while in the army, and the bonus was seen as the difference between their pay and what they would have earned as factory workers.

The vets contrasted their plight with the U.S. munitions industrialists who had made billions of dollars, “a despicable group of citizenry who waxed rich while America’s manhood groveled in the filth and corruption of the battlefield,” argued Arthur Pease, a resident of the Newington veterans hospital.

On June 12th, more than 235 vets left the city’s South Green for the nation’s capital. To those who opposed the massive protest and insisted on more passive methods of lobbying, Simon Kaplan, a tailor, replied “We tried writing.” As for being disloyal (another charge thrown at the marchers), Joe Loveland of Windsor said “I’m not ashamed to ask for something I earned. As for being disloyal, I have an honorable discharge that says different.”

A few days earlier, at Fitch’s Home for Soldiers in Darien, a dozen inmates (as they were called) quietly snuck out and were on the road to Washington. The angry director of the home warned that they were AWOL and would be discharged from their living quarters.

Connecticut Governor Wilbur Cross was worse than useless to the veterans’ cause. He argued that the vets would spread disease in the Washington camps. He warned that if the Bonus was won, it could hurt the state’s own veteran aid program. None of the veterans were listening. They were creating an army without guns.

Similarly, the head of the Manufacturers’ Association, E. Kent Hubbard, had spoken out against local initiatives to provide old age pensions for those who could no longer work. Such a plan would throw Connecticut into bankruptcy, Hubbard argued. The businessman’s solution was to improve the local almshouses and boarding houses.

The state’s veterans resented these tight-fisted attitudes. “The very financiers who had gigantic interests are now hooting the bewildered veteran, stifling his protests for a just hearing,” wrote John Clyde Williams of Hartford.

Connecticut’s Bonus contingent, including a large group from Bridgeport, arrived in Washington on June 14th. Their food and shelter were stuck in Baltimore thanks to a truck breakdown. They slept in their cars on the first night and welcomed food from the Danbury delegation. The state veterans’ camp was soon up and running, however, and well integrated into the tent city being built before their eyes.

The Bonus Army paraded through the streets and packed the congressional galleries to maintain a high profile. Constant activity also helped the men keep their promise that they would drink no liquor while part of the encampment.

Harry Bendell returned to Hartford briefly where he picked up more donations, including the proceeds from a newspaper the veterans were producing and selling. Leon Boniface, a tobacco store owner, lent Bonus supporters an empty storefront at 33 Albany Avenue for the dozen volunteer staff who canvassed Hartford’s neighborhoods. Pete Haverlic from Bloomfield donated two large pigs. An unnamed woman donated a brand new cot with mattress and bedding. Bendell continued to recruit marchers and left with 36 more men

Authorities were so frightened of this nonviolent army there were three agencies spying on the movement: the local police, the Army’s Military Intelligence Division (MID), and J. Edgar Hoover’s bureau of investigation. Hoover, predictably, said the movement was communist-dominated and that many of the demonstrators had criminal records and were not veterans. Confidential reports listed Darien, Bridgeport and Hartford as “centers of subversive unrest.”

The House passed the Bonus bill on June 16th but the Senate quickly voted it down the next day. President Herbert Hoover had already stated he would veto any bonus payments. Despite the serious blow, most of the men stayed at the camps. 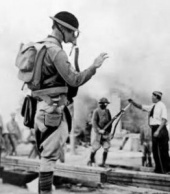 Without warning, on July 28th General Douglas MacArthur led hundreds of U.S. troops on horseback to destroy the Bonus camps. With tear gas and guns they evicted the veterans and their families and set fire to their makeshift homes. Two vets were killed and many were injured.

Undaunted, the Bonus veterans came back to Washington again and again each year to win approval for the cash payments. In 1936, Congress finally overrode Franklin D. Roosevelt’s veto and passed the bill.

The effect of the Bonus campaign was even more far reaching than the weary Hartford veterans could have imagined. In 1944 Congress passed the GI Bill of Rights, which provided college funds, mortgages and job training to almost 8 million vets.