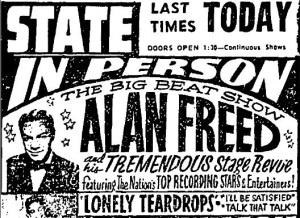 In 1955, the most racially integrated public space in Connecticut might have been the rock & roll concerts at Hartford’s State Theater. Despite the widespread discrimination against African Americans in jobs, housing and schools, black and white kids came together here on common ground. Located at the intersection of Main, Morgan and Village Streets, the State Theater featured the first wave of a musical genre that both revolutionized American culture and played a significant role in the fight for racial justice.

One of the earliest integrated concerts featured both Duke Ellington and Frank Sinatra at the State in 1942. The first rock & roll performers to appear in 1955 as the Penguins, a black doo wop quartet whose biggest hit “Earth Angel” had just reached the Billboard charts. The song was an early “cross-over” hit; its popularity broke the barrier between black and white radio audiences. Bo Diddley, Etta James, Fats Domino, Frankie Lyman and the Teenagers and dozens of other performers followed at the State, all with white groups, such as Bill Haley and His Comets, Mickey and Sylvia and others on the same billing.

Racial turmoil was building that year: it was in 1955 that fourteen-year old Emmett Till was lynched in Mississippi. Rosa Parks was arrested in Montgomery Alabama, sparking the famous bus boycott. On August 1, 1955, the Georgia Board of Education fired all teachers who were members of the NAACP.

During this same period, he Connecticut state civil rights commission reported that it was “virtually impossible for a Negro to rent a home in a white neighborhood.” The state’s NAACP targeted banks that refused to grant housing loans to black families. Literacy tests for voting were still part of state law. Two skilled electricians, both African Americans, struggled for five years to join the all-white union in order to work at their trade. According to one poll, only 20% of Connecticut’s white population supported full integration of the races,

It was remarkable, then, that in the local press black rock & rollers who came to town were not identified by their race. Instead, they were described by their particular musical style both in concert reviews and paid advertisements. In almost every other case, newspapers labeled individuals as “colored” or “Negro”, especially when a crime was being reported.

That is not to say Connecticut’s white majority was happy with early rock music. Racist press comments were frequent, using not-too-subtle code words. Rock & roll was “jungle stuff” wrote one local critic. It was “cannibalistic” and tribalistic” according to Dr. Francis Braceland, head of Hartford’s exclusive Institute for Living.

The first official crackdown on rock & roll took place on March 19, 1955. A New Haven festival was halted by police “when it seemed the dancers were getting out of hand.” Concert goers were all over 21 (beer was being legally served), but it was the “uninhibited” and “touchy” dancing that really seemed to disturb the authorities. “There will be no more of that,” stated Chief Francis McManus. Bridgeport then banned all rock events, three of which had been scheduled for April. In contrast to these crackdowns, when Hartford’s police chief suggested banning rock & roll (after eight arrests for fighting) Councilman James Kinsella strongly denounced the proposal as “censorship.”

One man was responsible more than any other for the integration of rock & roll audiences in Connecticut. That was Alan Freed, the Cleveland disc jockey who in 1951 first played Rhythm & Blues (R & B, or “race music”), which until that time had been heard only in the black community. He achieved national attention for a huge integrated concert that took place in New York just a few months before the first Hartford event. Freed was in Hartford frequently, acting as master of ceremonies at every concert he produced. “Mr. Rock & Roll” became as popular as the groups he promoted.

Freed is also given credit for coining the term rock & roll. While some critics called the music “noise,” Freed understood the historic roots of rock. The music “began on the levees and plantations,” he explained. “It took on folk songs and features blues and rhythm. It’s the rhythm that gets to the kids.” The controversial DJ is remembered today for his part in the payola scandal, a pay-for-play scheme with the record companies. But his legacy is really as the pioneer of rock & roll on radio, and his successful efforts to help integrate a new generation of youth.

The State Theater closed its doors in 1960 and was demolished two years later. Alan Freed died in 1965 and was among the first group of inductees–black and white– to the Rock & Roll Hall of Fame in Cleveland, “where rock & roll will never die.”