On stage at Bridgeport’s Park Theater in the fall of 1944 stood “Republico, The Little Mechanical Man.” He was an empty-headed dummy that the stage barker described as “handy, dandy, and works like a whiz.” With his slick hair and neat mustache, the figure looked a lot like Thomas E. Dewey, Franklin Roosevelt’s competitor in the presidential race. “He will not break, chip, or take action on any controversial subject,” the barker promised, and the audience erupted with laughter. The satire hit home with these FDR supporters.

October 7th was the premiere performance of the “Roosevelt Bandwagon.” This 17- act stage revue was backed by unions and organized by actor Will Geer (best known as Grandpa Walton), who had a summer home in nearby Nichols, Connecticut. “Republico” and the musical production traveled to 24 cities from Omaha to Boston. They met with enthusiastic crowds and some controversy; one sketch was banned in Providence RI.

Featured in the production was Mary Lou Williams, the “first lady of jazz keyboard.” Williams, an African American, was a child prodigy raised in Pittsburgh. She wrote tunes exclusively for the show, including “Ballot Box Boogie in the Key of Franklin D.” Woody Guthrie and Cisco Houston also performed for the revue.

Bridgeport has been called “an industrial fortress,” but the city has a lesser-known distinction as well. Theater, literature and film have flourished here, born from the workplace struggles of everyday men and women. Call it Theater for the 99%, the dramatization of working class life.

Worker-oriented theater dates back at least to 1910, when Bridgeport residents Ben Legere and Matilda Rabinowitz staged a production of Ibsen’s The Master Builder. The play featured the trials of a wealthy architect, but Ibsen was very popular among those who rejected high society entertainment. Legere and Rabinowitz would soon become union organizers for the Industrial Workers of the World (IWW), the radical labor organization that used song and theater to great advantage in the early 20th century.

In 1936, the groundbreaking Group Theater was spending the summer in suburban Nichols. Their production of Waiting for Lefty by Clifford Odets was banned by officials in Bridgeport, despite a very successful debut in New York. Lefty is a series of vignettes told by unionized taxi drivers who are anticipating the arrival of their leader. Each man has faced a moral dilemma, sparked by economic or political factors, that have brought them together in the taxi cab union hall. To show the absurdity of the ban, the Bridgeport Sunday Herald reprinted the entire play in its pages.

The Federal Theater Project, created by Roosevelt’s New Deal, provided jobs and popular entertainment during the Great Depression. Many of the plays focused on the social problems of the day. Writer Sinclair Lewis’s dramatization of his novel It Can’t Happen Here played simultaneously in Hartford and Bridgeport. The plot focuses on the possibility of fascism taking hold in this country in a distinctly American form. The cast included local Bridgeport actors and stagehands who depended on the government project to earn a living. 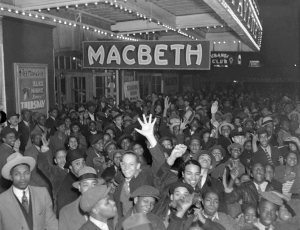 Macbeth (“the Scottish play”) is one of Shakespeare’s best-known works. In the hands of 21-year old Orson Welles, the daring production was, as a New York Times critic wrote, a drama that “overwhelms you with its fury and its phantom splendor.” Welles employed an all-African American cast, and moved the action from Scotland to Haiti. Macbeth played in only a handful of cities, including Bridgeport in July, 1936.

Not every stage show was dramatic. The musical Pin and Needles opened in New York in 1937. This highly successful comedy reflected the real-life experiences of garment workers. It evolved from a union hall cabaret to a full-fledged theater production that toured nationally. In January, 1938, the Park Theater provided Bridgeport’s working families with this uplifting, pro-union (and romantic) hit show.

During World War ll, the new union federation known as the CIO (Congress of Industrial Organizations) mounted a Broadway-style musical Marching With Johnny. It ran at Bridgeport’s Klein Memorial Hall in December, 1943. Although the production only lasted two months, it was unique for promoting the idea of cooperation between men and women war workers, in contrast to the common divisive rivalry that prevailed at the time. The musical also featured a song entitled “Crispus Attucks,” which told the story of the African American Revolutionary War martyr.

After the war, military production began to disappear in Bridgeport. So did plays that reflected working class life. Critics and opinion makers sneered at “proletarian theater.” We were all middle class consumers now, and our biggest struggles were supposed to be which home appliances to buy.