The boys at the Hartford Wheel Club had a great idea: they would organize a party and dress up like poor people! And so on January 20, 1893 the “Hard Times Supper” was held at their club rooms on the corner of Main and Grove Street. There was no reason to let the current economic recession ruin a good time. This was the Gilded Age, after all.

The club demanded a strict dress code for the affair: “anyone wearing a collar will be thrown out the window” warned the club’s invitation. The detachable celluloid collar was a formal accessory, and only manual laborers walked around without them.

Cigars and cigarettes were forbidden as well. Most of the poor and unemployed were not buying smokes when they couldn’t feed their families. Only corn cob pipes were allowed.

Four prizes were awarded for the “worst dressed” party attendees. Members of the press were asked to be judges.

The bill of fare was designed to fit the club’s poverty theme. It is likely the Wheel Club members could afford steak and champagne, but for this meal they were only offered hardtack, dried herring, cold pork and cider.

The panic of 1893 was no joke, however. It was an era of slums, sweatshops, and widespread poverty. The Gilded Age was a term coined by Mark Twain, and the title of his first novel, co-authored with Charles Dudley Warner. It served as an exposé of the growing financial and industrial monopolies, corruption and excess wealth. It was called a “tale of golden fortune” by one review a local newspaper, which seemed to miss the point.

Being a dues-paying Hartford Wheel Club member was an expensive hobby. A bicycle cost $3,500 in today’s dollars, the equivalent of half a year’s wages for an average workman.

In 1878 Albert Pope began to manufacture these “penny farthings”– odd-looking high-wheeled vehicles– at his plant on Washington Street in Boston. His Hartford factory was located on Capitol Avenue. The Wheel Club took their cycles to races in other states, which had to mean two-or three day treks. Since the work week was 6 days (and at least sixty hours) only the leisure class could spare the time to compete.

There had been twenty-four recessions and depressions in the American economy since 1785; the last recession had hardly ended when a stock market crash, a run on the gold market, and banking failures threw many thousands out of work.

The unemployment rate jumped to 13 percent, and people coped the best they could. Women who could not find work were sometimes forced into selling their bodies: during this period Hartford was home to 12 brothels and 400 prostitutes, about one for every forty adult men. 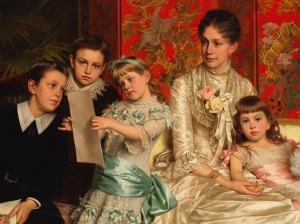 “Where are the poor of Hartford?” wrote Mark Twain when he first visited the city. “I confess I do not know. They are ‘corralled,’ doubtless– corralled in some unsanctified corner of this paradise whither my feet have not yet wondered I suppose.”

He was right. The Irish immigrant population lived in poverty in the east side neighborhood known as “Pigville.”

Massive unemployment meant more hoboes roaming the city, which spurred the Rev. John J. McCook to lobby for restricting “tramps” to a limited section of Hartford where the almshouse was located.

The African American population was small, but job discrimination meant that black families suffered the worst housing and health conditions of any ethnic or racial group in the city.

By the time Mark Twain moved to Connecticut, The Gilded Age had been published and a play based on the book reached theaters in New York and Hartford. Twain championed labor unions as a means to balance the wealth gap between the “one percent” and everyone else.

As it turned out, even the Hartford Wheel Club could not escape hard times. They failed to pay their rent in October 1899; the landlord evicted them and seized their property.