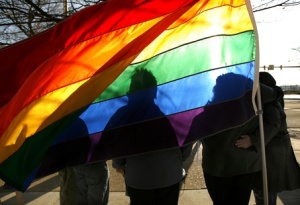 Hartford’s first gay liberation group decides that ‘coming out’ means direct action and if necessary, confrontation with the police.

On September 3, 1971, eleven Kalos Society members are arrested while protesting at a local gay bar where lesbians are being harassed by the management. The owners of the Park West club want women customers to dress “properly.” They eject those who ignore the gender norm of the day.

Undeterred by the busts, Kalos members keep up their nightly pickets until the owner capitulates.

The Kalos Society begins in 1968 as a social organization (known as Project H) with the support of Episcopal Canon Clinton Jones. One of their early public events is a picnic outing at Goodwin Park in September, 1970 in spite of neighbors’ protests.

The group quickly becomes the local “gay liberation front” inspired by the Stonewall Rebellion in New York, a 1969 response by trans militants to constant police raids. Gay advocacy, which has mostly been quiet lobbying, has now taken on a public and assertive social justice quality.

Kalos publishes a regular newsletter, The Griffin, which is available at gay bars and in the stores at Hartford’s Union Place (known for radical and counterculture activity). The group relates to politics of the left: the Griffin quotes Black Panther leader Huey Newton and sponsors a bus to the 1972 Vietnam war protest in Washington, D.C.

Less than a month after the bar protests, Connecticut becomes the second state in the nation to decriminalize private sexual relations between consenting adults.