Reaching all the way back to the 1600s, Connecticut was first a colony made up of three towns: Windsor, Wethersfield, and Hartford.  In 1662 a royal charter from British king Charles granted the colony control over territory through New York and Pennsylvania, and west to Ohio (the native people already there weren’t consulted). 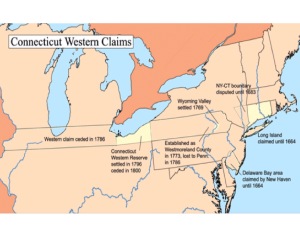 Some Connecticut residents moved to Wilkes Barre, PA (named for two British members of Parliament who sided with the rebels), and in 1753 they created the  Susquehanna Company on the river of the same name. They set up their own industry– making beer. The Wilkes Barre brewery became one of the first breweries established in North America, but on July 3, 1778, in the midst of the Revolutionary War, a British attack cost three hundred Connecticut lives.

You may not recognize this fellow.  He was Benjamin Rush (1746-1813), a physician who signed the Declaration of Independence, served as Surgeon General of Continental Army, and was a pioneer of mental health treatment. In an analysis issued on July 14, 1784 and subsequently published in Connecticut Courant, Rush reported on spirits and their effect on people. “Cyder,” Rush said, is an “excellent liquor,” except for those with rheumatism.  Wine is also wholesome, drunk in large quantities by the French who are “a healthy and sober body of people.” But Beer is a “wholesome liquor” full of nourishment. As an example, he cited the English common folk who were engaged in hard labor and survived on bread and a quart of beer a day. Beer should not be taxed he insisted, making Benjamin Rush the leading contender as our “founding father of brew.” 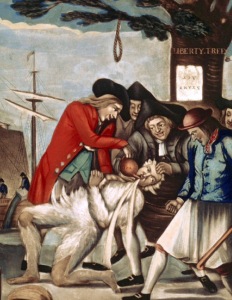 Around this same time, just after the U.S. Constitution was ratified, 17,000 patriots met on a Philadelphia green to celebrate its passage. They did so “without intoxication or a single Quarrel,” according to a news report, because “they drank only beer and cyder.” The Courant article continued: beer is the only federal drink that is a “companion to those virtues that alone can render our country free and respectable.”

Not everyone loved beer.  In 1789, two hundred Connecticut  farmers got together and organized the country’s first Temperance Society.  In 1854, we actually enacted our own Prohibition Law for about sixteen years before it was repealed.

Until 1865, Hartford depended on beer from New York and Newark (Ringlers, Schaefers, Lions Brew, Elias & Betz).  But after the Civil War, the city began to produce its own suds:

The Charles Herold Brewery was established in 1865 on Bellevue Street. It expanded to Windsor Street and became Columbia Brewing in 1896 and Aetna Brewing in 1900.

Four years later the Shannon & McCann brewery was established. It was renamed the  Hartford Brewing Co., then the Ropkins Brewery, located on Sheldon and Front Street.

In 1875 Hubert Fischer moved from Brooklyn, New York  and set up shop on Park Street.

Later, in 1879, the German brewer M.G. Sichler of Staten Island began brewing a lager beer on Albany Avenue. Soon he was producing 800 kegs a week (four kegs to a barrel) , and exported his product to other Connecticut  cities.

And by the end of the 1800s, New England Brewery organized on Windsor Street.  It became the New England Food Company in 1922.

That seems like a lot of beer for one small city. To put this into perspective, however, at the same time New York City was selling 617 million glasses of beer every year, taking in $31 million in 1879– a great deal of profit and a great deal of tax revenue. 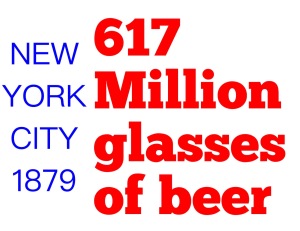 During this period there was a dispute– one that lasted into the 20th century–over the question of whether or not beer was intoxicating, and therefore dangerous. On December 17, 1878 a judge in Norwich ruled that “hop beer” could have an intoxicating effect on the drinker (at the trial it was tested to contain 4.8% alcohol, which was higher than European beer).

The basics of beer making had not been fundamentally altered in centuries, but the distribution and advertising of beer changed dramatically around 1900.  The Sanitary Draught Beer Company on Welles Street opened, offering the first “automatic beer casks.”  They were portable kegs– ceramic tanks placed inside wooden containers, sold either in 1 1/2 gallon or 3 gallon sizes. Consumers would add a spout and “carbonic acid” (carbonation) to replicate beer on tap. Bottled beer often went flat due to inefficient and unsanitary corks, so this was touted as a solution to keeping beer fresh for use in your home or on a picnic.

The licensing of Hartford saloons and restaurants became a big business. While tax revenue in 1884 came to about $1300 a year (today’s’ dollars), by 1909 licenses brought in $2.7 million annually.

For centuries, beer drinking has been the subject of many quotes and much folklore. Benjamin Franklin did not say “Beer is proof that God loves us and wants us to be happy” (he actually said wine), but Mark Twain did quip that “water, taken in moderation, is harmless.”

In February 1914, a Sheriff in Wilkes-Barre Pennsylvania discovered that beer could dissolve a frog. He confiscated some bottles of home-made brew; one bottle had a frog in it which had snuck in through the neck.  He put the bottle aside and one year later– the frog was gone. There was no way of knowing if the sheriff was sampling the contraband brew.

The Hartford beer supply shrunk by one third in 1918 due to World War I. The National Fuel Administration ordered reduced production for three months, in order to conserve barley as food consumption. Hartford’s breweries at the time– Aetna, Fischer, Ropkins, and New England Brewing– were all affected. The federal cutback was a harbinger to Prohibition.

In June, 1919, just before beer production stopped altogether, Connecticut  breweries were producing 67,000 barrels a month, a total of 750,000 the previous year.  The larger figure can be accounted for because people were stockpiling their brew in anticipation of Prohibition.