It’s been more than 75 years since the legendary Flint sit-down strike by Michigan autoworkers, a watershed event in American labor history. The 44 day strike had a powerful impact on millions of working people. But two years before the Flint sit-down, Hartford workers engaged in a similar action.

Hartford’s first sit-down strike took place at the Capewell Horseshoe Nail Company on Charter Oak Avenue in the Dutch Point neighborhood. It started on April 10,1935. In its day, Capewell had produced two-thirds of all the horseshoe nails bought in the U.S., and employed over one thousand workers. But by the thirties, automobiles (like the Chevrolets made in Flint) had replaced horse travel and Capewell’s employees totalled no more than one hundred.

The Capewell factory was organized into three different collective bargaining units. The Machinists Union and the Horse Nail Makers were male dominated. The Assorters and Packers Union was made up exclusively of women. All three had a history of fighting and winning in the early 20th century, including strikes in 1902, and 1916, and a successful fight for the eight-hour day in 1913.

refused to bargain with them. This legal strategy produced little success.  In April, Capewell laid off eight workers. The boss said that business was slow, which was probably true. But the workers identified another motive behind the layoffs: union busting. Five of the eight were union men, including the chair of the shop committee.

When the union demanded reinstatement of the men and were rebuffed on April 10, the workers “sat with folded arms in front of their benches,” wrote a local newspaper, using the Wobbly term to describe their sit-down. The tactic was also called a “Gandhi strike” in the press, referring to the Indian leader who was leading the fight against British colonialism, using effective acts of nonviolent noncooperation.  The Mahatma had already led South African miners and Indian textile workers in powerful strikes.

Two days later the Capewell workforce walked out.  Within  a month  the union reached agreement on the distribution of available work, including hours for those who had been laid off.

How Sit-downs Began
Where did the sit-down strike originate? In 1905 at the founding convention of the Industrial Workers of the World. Lucy Parsons (widow of Haymarket martyr Albert Parsons) told the crowd that “the strike of the future is not to strike and go out and starve, but to strike and remain in and take possession of the necessary property of production.” Lucy Parsons’ words were prophetic: a year later, Wobblies at a New York General Electric factory led what they called a “folded arms” strike inside the plant that lasted three days. The first large-scale sit-downs took place during 1936 among Firestone workers in Akron, Ohio to win a wage increase and curb assembly line speed-ups..

Connecticut laborers in 1937 were inspired by the success at Flint, and after the February 11th victory in Michigan there was a rush to organize in this state using the same tactic. On March 11, four hundred workers at the Whitney Chain & Manufacturing Company put down their tools for one hour until a management representative met with their committee. Six days later, the Hartford factory workers had won a 10% wage increase, overtime pay, and a later start time for their shift.

When the workers at Standard Steel and Bearings in Plainville voted to strike on March 19, the boss assumed they would walk out. But instead, 550 workers shut down operations after lunch on March 24 while their United Auto Workers (UAW) negotiating committee met with management. Then they walked out, successfully stopping shipments into the plants. The strikers, who made ball bearings for companies like Chrysler, won support from local clergy and from Dr. Emily Pierson, an early suffragist who supported many labor causes. After four weeks the strikers won union recognition for the CIO affiliated union.

In the town of Baltic, 400 textile workers sat down for a day at the Shetucket Worsted Mills on April 1, 1937. They left the mill when officials promised to meet, and continued the strike The action, led by the CIO’s United Textile Workers of America, was settled three weeks later. 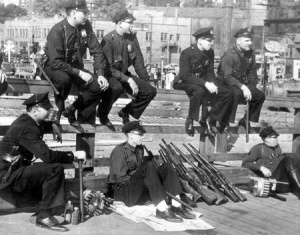 tool. Business leaders called it un-American. Congress debated a sit-down ban. Connecticut Governor Wilbur Cross ordered the state police to arrest more than one hundred sit-down strikers at Electric Boat in New London. Hartford insurance companies complained that sit-downs caused millions of dollar worth of damage, and that premium costs would have to increase. Yale professor O. Glenn Saxon told a Hartford audience that the sit-down strike was “unjustifiable from any point of view” and a gross violation of property rights. The sit-down, according to the business teacher, was an outgrowth of the IWW tactics.

William Green, the president of the American Federation of Labor (AFL), warned workers against using the practice, declaring that sit-downs “must be disavowed by the thinking men and women of labor.” Green spent most of 1937 trying to stop the rival CIO from eclipsing the tired and conservative practices of the AFL. Green’s federation had long ignored unskilled and industrial workers in favor of the skilled trades, while the CIO was having great success with mass organizing. The Connecticut AFL’s response to the CIO’s success was to expel ten CIO-affiliated unions in September, 1937.

Sit-down strikers today have no legal protection. The 1939 Supreme Court case known as Fansteel ruled that an owner’s property rights are more important than workers’ right to organize. The 1947 Taft-Hartley amendments to the National Labor Relations Act further eroded workers’ power by allowing companies to use court injunctions against direct actions. But even these attacks did not eliminate workers’ use of the sit-down.

In 1941, Naugatuck rubber workers stopped production in a number of departments over their struggle to protect their union shop status. It took only a few hours each time a department stopped work to convince the boss that the United States Rubber Company should be 100% union.

Nurses at Norwalk Hospital staged their own brief sitdown strike on November 6, 1950. In protest of stalling tactics by the hospital administration during negotiations, the first shift handed over their assignments to off-duty nurses and nursing students so patient care would not be interrupted. They met in the dining room and called the press, which took photos and interviewed the healthcare workers. The nurses’ sit-in caused an immediate reaction from the hospital, which ordered them back to work They refused, and within three hours the administrators were forced into contract talks. Nurses, nursing aides and orderlies won pay increases and improved working conditions.

During the successful eight-month strike by Pittston coal miners in September,1989 workers seized and held a Virginia coal treatment plant for four days. Surrounded by 5,000 supporters, the miners called their action “Operation Flintstone” in honor of the 1937 Flint sit-down strike. By December the 1700 miners had won.

In December 2008, workers at Republic Windows and Doors of Chicago barricaded themselves and the company’s expensive equipment in the plant. Their goal as to stop the boss from surreptitiously closing the factory and leaving town. The 260 members of the United Electrical (UE) union forced negotiations with the boss, won back pay and benefits, and found another owner for the plant.