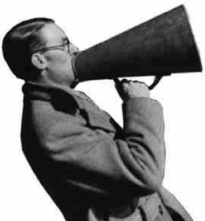 No ESPN, no sports radio, no internet scores. In 1913, all Hartford baseball fans had was the Megaphone Man.

He stood in front of the old Hartford Courant building on State Street during the 1913 World Series, with a huge wooden baseball diamond that allowed spectators to follow every play between the New York Giants and the Philadelphia Athletics at the famed Polo Grounds in New York. The Courant boasted a “direct wire” from the game. Each run and every out was shown on the board and announced as it happened by the man with the megaphone.

Before the advent of radio, fans could also call the Courant switchboard for local and national scores. The newspaper reported that its telephone operator was once required to announce the Hartford team’s double header loss to New Haven at Savin Rock. So anxious was he that every time the phone rang, he suffered from “nervous prostration.”

Hartford was baseball crazy. The earliest ball games played in fields and on city streets were wicket, round ball, and  one o’cat, all considered precursors to the game we know today. In the 1860s Civil War soldiers helped popularize the game of baseball upon their return to Connecticut. Young clerks (who often slept in the dry goods stores that employed them) woke at 5:30 am to play downtown on State House square before the businesses opened.

The city’s first organized club was the Charter Oak Baseball Nine in 1862, followed in 1874 by our only pro team, the Hartford Dark Blues, one of the charter teams of the National League. The Dark Blues gave rise to such players as Candy Cummings (inventor of the curve ball) and player/manager Bob “Death to Flying Things” Ferguson.

Mark Twain, who had moved to Hartford in 1871, watched the Dark Blues when they played on the Wyllys Street field (now occupied by the Church of the Good Shepherd Parish House). After one game in 1875, Mr. Twain discovered his umbrella missing. He placed a classified ad the next day in the Courant:

To the Public
TWO HUNDRED & FIVE DOLLARS REWARD–At the great baseball match on Tuesday, while I was engaged in hurrahing, a small boy walked off with an English-made brown silk UMBRELLA belonging to me, & forgot to bring it back. I will pay $5 for the return of that umbrella in good condition to my house on Farmington avenue. I do not want the boy (in an active state) but will pay two hundred dollars for his remains.
Samuel L. Clemens.

Soon, Hartford neighborhoods, churches and businesses all fielded teams. In the summer of 1874, the Knights of St. Patrick found themselves with too many players. How should the Hartford Catholic mens’ society divide them up? The team decided to organize two clubs: the fat men and the lean men. The large players “claimed championship for weight,” according to a news report, but the skinny guys beat them 47 to 16.

By 1911, eight insurance companies organized enough teams for their own league. The Frog Hollows, the Immaculate Conceptions and the Hartford Hospital nine all played in the state baseball league just before World War II.

International Connections
Baseball has also provided our city with an introduction to distant nations and cultures. A traveling Japanese ball team played Trinity College to a draw in 1911. The Cherokee Indian Baseball Club challenged teams around Connecticut, including Bridgeport and Manchester in 1907. Hartford’s Pope Automobile Company team visited Mayaguez, Puerto Rico to play local clubs there in 1912.

Cuban ball players recruited by the New Britain Aviators—Armando Marsans, Rafael Almeida, Alfredo Cabrera— attracted great attention when they played Hartford in 1908. Other players like lefty pitcher Claudio “Mike” Manela joined the Hartford Senators in the 1922 (he was actually a Filipino, born in Manila).

The great Louis Sockalexis, from the Penobscot nation in Maine, played for Hartford’s semi-pro team in 1901. The possibility of a record-breaking career was cut short by injuries and hard-drinking. He left Hartford for Waterbury and played a good season, but could not sustain his skillful hitting and fielding in the face of alcohol.

Working Class Heroes
Baseball in this city always stayed true to its working class roots. Local Western Union telegraph workers, on strike in 1883 against the notorious robber baron Jay Gould, took a break from their labor fight to play each other in a friendly game on the field just north of downtown. In 1890, street car conductors played trolley drivers. In 1908 the plumbers’ union whipped the employees of the Austin Organ Company by the score of 14-6. Pennsylvania coal miners and cigar makers from Springfield, Massachusetts traveled here to play in Hartford.

Ignatius Sullivan had been a member of the Knights of Labor, an early progressive union that welcomed women and African Americans. He was an active union leader who led Hartford’s Central Labor Council until he became the city’s mayor in 1902. Despite all his duties, Sullivan maintained an active love of baseball. In his first year in office, Sullivan and his Hartford municipal team traveled to Bridgeport to play that city’s municipal employees. One hundred Hartford fans traveled by trolley to cheer on their local aldermen, police officers and clerks. They were especially proud of the curve ball pitching by Dr. J.H. Naylor, who also scored a triple that day. (Dr. Naylor directed the city’s Board of Health and practiced at Hartford Hospital.)

Bridgeport secretly placed a ringer on its team: Fire Commissioner James H. O’Rourke. This city official was actually “Orator Jim,” who played and managed in professional baseball for almost thirty years (he made the very first hit in a National League game). He got his nickname for “his tendency for lengthy rhetoric” on the field and was inducted into the National Baseball Hall of Fame at Cooperstown in 1945. Against the Hartfords, the 52-year old O’Rourke hit a double, stole a base, and made a double play. It wasn’t enough to beat Sullivan’s team, however. They whipped Bridgeport 12-7.

Women and Baseball
Until recently, it has been harder to document the role of women in baseball. We do know that Meriden was home to a female baseball team in 1891. Their presence was noted in Sporting News, the national periodical that chronicled baseball. The News reported on a traffic accident where some of the women narrowly avoided injury. The article’s headline–“Good Riddance”– exposed the prevailing negative attitude against female participation in the world of sports. 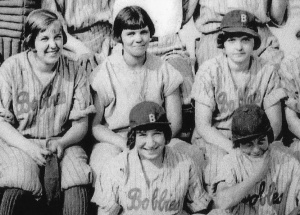 In 1897 a women’s team traveled from New York to play the Hartford Reserves. The visitors lost 19-11. It didn’t help that only seven female players took part in the Hartford game.

In 1923, Alice Schenck gained the reputation as one of the area’s best girl baseball pitchers. But Alice only found fame when she stole a policeman’s auto and was captured after a joy ride.

Professional players across the country, like Mamie Johnson and Jackie Mitchell, made their mark on the game but still aren’t given the recognition they deserve. Mitchell was the only woman to have a contract in professional ball. She pitched in Hartford with Buck Lai’s Hawaiians in 1934 and again for the Hartford Senators. Banned from pro ball by Judge Kennesaw Mountain Landis (the notorious union buster) she ended her career in 1937. Mamie “Peanut” Johnson was one of the few women to play in the Negro Leagues. Born in South Carolina, with family ties in Hartford, Johnson pitched for the Indianapolis Clowns.

Sunday Baseball
The ban against Sunday baseball was controversial for decades. When the game’s popularity first grew, factories operated six days a week  from dawn to dark. Only Sunday was available for workers’ recreation. Working men wanted to go to games and team owners wanted crowds. “Give the working man a show,” editorialized a Hartford newspaper.

One team manager had his team play on the border of two towns as a way of avoiding arrest: when a police officer from one town attempted to stop a Sunday contest, the manager moved his men to the other town and challenged the cop’s jurisdiction. In 1914 Hartford police arrested two 12-year old boys for playing on the Sabbath. As popular as the game was, local amateur and semi-pro teams could not afford the heavy fines that authorities might impose for violating the Sunday blue law. The 1925 General Assembly finally passed a “local option” law permitting towns to allow Sunday games.

Night baseball was another way to allow workers to view ball games. As far back as 1890, a team owner set up electric lights to illuminate night games. The owner was having trouble making payroll and needed the extra revenue. In July, local fans saw their first night game between the Baltimores and the Hartfords on the Ward Street baseball grounds. Unfortunately, there were too few lights and “the audience had to guess what was going on,” according to one sports writer. Still, the game made a profit– the players received back wages, and the electric company bill was settled (the utility had demanded payment upfront, even if the game was rained out).

African American Greats
The African American presence in Hartford baseball was strong. With few exceptions, the game was strictly segregated, requiring the creation of teams such as the New England Colored Giants. The Giants came from the city but played in Windsor’s Sage Park in the 1920’s. The Hartford Senators and the Savitt Gems hosted the New York Black Yankees and the Cuban Giants, two prominent members of the national Negro League.

Mahlon “Duck” Duckett and John “Mule” Miles were Negro Leaguers who played, respectively, for the Philadelphia and New York teams. After a New York game they traveled to Hartford for exhibition games against the Gems. Segregated baseball turned players like Duckett and Miles “from second class citizens to second class immortals,” quipped Satchel Paige.

Johnny “Schoolboy” Taylor was making his mark as an athlete while still a student at Bulkeley High School. This African American youth, raised in the South End, was highly sought after in the 1930s by pro and semi-pro baseball teams alike. He probably could have played for the New York Yankees, but he refused to pose as a Cuban, which would have allowed him to slip past the Jim Crow color barrier. Instead, Taylor pitched on Negro League teams against such greats as Cool Papa Bell, Josh Gibson and the legendary Satchel Paige.

Kill the Ump?
Baseball has always generated intense emotions, but not always pleasant ones. In 1874, Hartford fans were given a stern warning: there would be no hissing the umpires during the game. “Baseball manners need mending,” warned a Hartford newspaper. Visiting clubs were subjected to jeers and insults by “cowardly hoodlums.” Just as today’s fans take their frustrations out on umpires, Hartford baseball’s arbiters of the past received the same thankless reception.  City players and managers attacked umps for bad calls; enraged fans threw bottles and lemons and sometimes charged from the bleachers onto the field.

One local baseball owner, disgusted with all the fights generated by controversial calls, devised a plan for a remote-control referee. Anticipating today’s electric scoreboard, he proposed the “automatic umpire,” a tall box behind the plate where the official would use a combination of wires, a keyboard, and binoculars. The calls would appear on a large board so that decisions would be quickly relayed to the crowd in an effort to eliminate the “prevalent rowdyism” which afflicted state and local contests.

If anyone could tame crazy fans, it would be Hartford’s Mark Twain. The famed author once agreed to be an umpire for an amateur game in New York, fully aware of the way fans frequently reacted to bad calls. He came to the ball field prepared. Dragging a large box onto the field, he informed the crowd it was packed with dynamite. Every time the crowd started to complain, he would slowly and deliberately place his foot on the package. The fans quieted down.