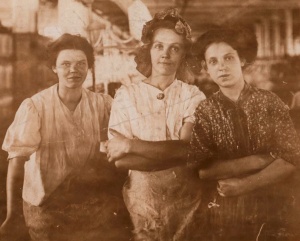 My grandmother Nellie Grace arrived in Boston from Ireland in 1909. On the ship manifest she was described as a domestic servant. Many people’s relations have come from similarly humble beginnings. The fabric of Connecticut history is made of many threads, spun from the sweat and blood of working men and women. It’s a shame that we are often not aware of the economic hardships and workplace struggles they endured, for the story of Labor is the story of our families.

Labor Day gives us the opportunity to reflect on our roots, and to learn how Connecticut workers first celebrated a holiday created especially for them. Adolphus Frederick Hunie and his family moved to New Haven in 1858, leaving behind their native Switzerland. Three years later Hunie was a soldier, fighting for his new country in the Civil War. When the war ended, he returned to his work as a wheelwright. Hunie was later elected to the Connecticut General Assembly, a proud member of the Knights of Labor. In 1889, Aldolphus Hunie authored the state’s original Labor Day bill. 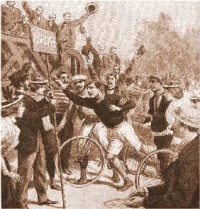 In September of that same year, thousands of working families celebrated their first Labor Day. Big cities like Hartford held parades, concerts and organized games, of course, but so too did Winsted, a small, bustling town in the state’s northwest corner. Winsted’s factories and stores closed for part or all of the day. More than 3,000 people descended on Highland Lake, many of them from surrounding towns. Fun and relaxation was the first order of business, but Winsted workers also heard a stirring speech by the Italian activist O. J. Villetteo on “Labor and its Needs.” And in a possible homage to John Henry, the mythic “steel-driving man,” a sailor raced a local yacht and defeated the steam-powered beast.

The Knights of Labor was a popular national workers’ organization in the late 19th century. It sought to unite all workers regardless of skill, race or gender. The Knights believed in cooperative enterprises and introduced boycotts to the tool kit of organized labor.  In Connecticut, thirty-seven Knights were elected to the state legislature over time. Workers like Thomas Kehoe, a New Britain carpenter, and Thomas O’Rourke, a Danbury hatter, lobbied hard to pass child labor protections and workplace safety laws. 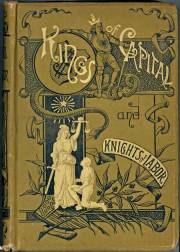 In May, 2015 the Connecticut General Assembly approved the creation of a supplemental curriculum that would round out students’ knowledge of the history of work and workers. Those in Connecticut who opposed the creation of such a supplement should just come clean about their opposition. Silence about labor history may be good for the One Percent and right-wing ideologues, but the rest of us need a balanced view of the past in order to make sense of the future.

It is no coincidence that in the conservative 2010 revision of Texas history textbooks, “labor is conspicuous by its absence,” according to historian Eric Foner. Even Rod Paige, secretary of education under George Bush, warned that “we have allowed ideology to drive and define the standards of our curriculum in Texas.”

Labor Day and the teaching of labor history is about union organizing, but it is also much more. “Labor” spans generations and genealogy. It is the story of Abraham Lincoln, Frederick Douglass and Mohandas Gandhi, all stalwart union boosters. It’s the story of Mark Twain, Helen Keller and Albert Einstein, proud union members.
And it’s American folklore. Tales of the lumber jack, the seamstress and the agricultural worker–Paul Bunyan, Betsy Ross, and Johnny Appleseed– are deeply ingrained examples of honest, courageous work that benefits our whole society.

Labor Day should not be just a day of rest, but a day of remembering. Labor history is a vital subject of study that helps us achieve that purpose. If workers’ stories aren’t honored, we will be erasing the memory of our grandparents.