When the Irish playwright and poet Oscar Wilde visited Hartford on February 2, 1882, a local newspaper scornfully reported the event attracted only 200 to 300 people and was a financial failure.

It was a pathetic attempt to ridicule his performance; after all, everyone in the region knew Hartford was in the midst of a great blizzard that virtually shut down the city.

The storm raged during the night of February 1st, obstructing public transportation, including the horse railroad (the first trolley), passenger trains, and pedestrian movement. Up to four feet of precipitation fell; wind-blown drifts further clogged streets and sidewalks.

None of this stopped Wilde from his appearance at the 1,700 seat Roberts Opera House, Hartford’s largest theater hall at the time. Our city was one of his first stops on a national lecture tour.

“It is well worth one’s while to go to a country which can teach us the beauty of the word  FREEDOM and the value of the thing LIBERTY,” Wilde replied when asked why he visited America.

He had not yet written his most famous works (among them The Picture of Dorian Gray and The Importance of Being Earnest) but his advocacy of the European Aesthetic movement brought him fame that spread to the United States.

Aestheticism proponents believed that “art exists for the sake of its beauty alone, and that it need serve no political, didactic, or other purpose.” In a sense, the movement was a reaction against the ugliness of the Industrial Age.

Although the artistic trend was portrayed as an intellectual pursuit for the international elite, Wilde believed that art should be available to everyone. “The clerk, the day-laborer and the shop-woman may be taught to appreciate” beauty which is “latent in every man and woman,” according to the lone pro-Wilde correspondent in the Hartford Courant. Wilde is still known today as a cultural pioneer who urged women to leave Victorian dress behind and adopt comfort— including wearing pants— instead.

The caricatures of Oscar Wilde (never flattering) often included a sunflower or lily.  Wilde, in fact, did count such flowers as natural beauty to be admired for its own sake. This idea was not as outlandish as the one-percent (the Gilded Agers) may have thought. Consider, for instance, a popular union labor song to win the eight-hour day. How different is it from Wilde’s ethos?

We want to feel the sunshine; we want to smell the flowers;

We’re sure that God has willed it, and we mean to have eight hours.

We’re summoning our forces from shipyard, shop and mill:

Wilde himself said that upon retirement from his successes he would find a place “to work and dream.”

Oscar Wilde’s mother, Jane Elgee, greatly influenced her son. She was a linguist, writer, and poet, born in County Wexford, who worked to preserve Irish folk tales and legends being wiped from the collective Irish memory. She was part of the Young Ireland movement which opposed British colonialism that threatened to destroy the indigenous culture, including the speaking of the Irish language.

Wilde was much more of a political rebel than he is given credit for. Greatly influenced by Peter Kropotkin, Wilde considered himself “something of an anarchist.” After his American tour, he penned “The Soul of Man Under Socialism,” a well-reasoned essay on libertarian socialism.  In 1886, he raised his voice in support of the Haymarket Martyrs, Chicago anarchists and labor activists on death row for a crime they didn’t commit. 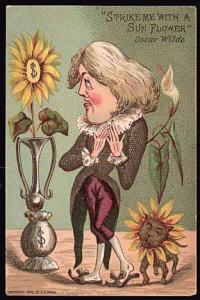 Many critics were merciless with Wilde for his long hair and fabulous appearance. He was called a “baboon,” “radically corrupt,” an “insult to art.” They hinted —not so subtly—  that he was a homosexual. He was in fact a gay man, at a time when being out would mean prison or worse. The Courant, taking its cue from English newspapers and magazines like Punch, was unrelenting in its homophobia. It was his “outlaw sexuality” that led to Wilde’s 1895-1897 prison sentence at hard labor, the paper said.

There were rumors in Hartford that Trinity college students planned to disrupt the Opera House performance (as Yale students had done in New Haven the night before). Wilde’s lecture was not interrupted, however, except by a few male audience members who left the Opera House at the very start.

The young aesthete stayed that night in the United States Hotel, near Honiss Restaurant on State Street. The press followed his every move; even his dinner menu was advertised as far away as Pittsburgh.

Oscar Wilde went on to successfully appear in one hundred and twenty three cities in the United States and Canada. Both praise and criticism followed him. But as Wilde wrote in The Picture of Dorian Gray: “there is only one thing in the world worse than being talked about, and that is not being talked about.”