In a few rooms above Giolito’s Restaurant on Market Street, not too far from the Hartford Police Station, Sam Bernowsky hung the charter for the local branch of the Industrial Workers of the World (IWW). The document was signed by “Big Bill” Haywood, who was under federal indictment at the time for obstructing the United States’ role in the first World War. Sam’s job was to organize Hartford’s unemployed, part of the IWW’s goal of organizing all working people.

It was March, 1919 and within a few weeks, thousands of Hartford-area workers were flocking to IWW meetings chaired by Peter Kraskowsky and secretary Harry Nelson. The IWW’s success was growing particularly among immigrant workers. Unemployment was high now that soldiers were returning home from the war. The guarantee of a minimum wage was still being opposed by local manufacturers. African Americans were petitioning the State to end discrimination. Women were organizing for the right to vote. Labor unrest was at its peak, with 18 strikes in Hartford alone during the past year.

different communities into “One Big Union” was fast and furious. A local newspaper reported that it had “uncovered” local IWW literature but refused to print it because it was “so dangerous that complete publication is prevented.” Instead, the paper printed a large photograph of the building in which the union rented office space with the caption “Headquarters of Reds in Hartford..” Soon after the photo appeared, landlord Timothy J. Long threatened to kick the IWW out. “What good will it do to make us get out of here?’ asked organizer Harry Nelson. “We’ll only get quarters somewhere else.” They were soon evicted.

Similar harassment took place when the union planned a “Grand Concert and Ball” at the Italian Club around the corner on Central Row. The building’s owner’s initially rented the IWW the space, but balked at the last minute and wouldn’t open up the hall on the night of the event. Young men and women, dressed for the occasion, jammed the sidewalks anyway.

Hartford Mayor James Kinsella put the police chief on alert “for when the IWW breaks the law.” Kinsella was under a lot of pressure to simply round up and arrest radicals like the city of Waterbury had just done. The Waterbury raid nabbed Sam Bernowsky who was then threatened with deportation. Kinsella, however, noted that most of those arrested in the raid had been released without charges.

Other city officials urged the state legislature to allow towns to “authorize the construction of armories within their respective limits and the issuance of machine guns to be prepared to cope with threatened uprisings.” The Hartford Board of Aldermen passed a city ordinance making it a crime to carry a red flag, and the General Assembly soon followed suit. (It took a group of UConn law students in 1972 to have the law overturned as an infringement on free speech.). In the spirit of the times, the Hartford Fire Insurance Company began to offer “strike insurance” against riots, civil commotion, and the “occupying of factories” by workers.

Even members of Hartford’s religious community got into the act. Reverend Howard V. Ross of the First Methodist Church warned upstanding native-born churchgoers about subversives and how to spot them. His public comments were directed as much at the local immigrant population as the union that was trying to organize them. He told his flock that immigrants were:

“A sodden, sour, bitter mass of humanity that resists the best ideals of American and Christian civilization From the lowest peasant class of Italy, with their ideas of low living and filth and poverty, from the Balkans with low instincts of society and womanhood. If you seek the anarchist, the Bolshevist, the wild-eyed turbulent radical, when you find him and look into his face, behold it is the face of a foreigner…”

Not to be outdone, another local preacher, the Reverend Herbert Judson White, 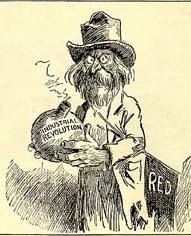 laid out his plan for dealing with unemployed immigrant workers. “They ought to be treated like any other criminals,” White said. ” They want to live without working. Several boatloads should be deported from every state in the union.”

These views did not go completely unchallenged by other church leaders. Although they would not come right out and support union organizing efforts, a number of local clergy did respond to Ross and White. They suggested that “we should be willing to remove proven social injustice” in order to dampen the revolutionary fires that were being ignited in Hartford.

The IWW organizers chose the issue of unemployment to expose the inability of both business and government to meet the basic needs of working people. A packed rally at the Grand Theater organized by the union supported the following resolution:

Whereas several thousand workmen in Hartford are willing to work but can find no employment, and

Whereas if this condition continues, it will result in hunger and misery among a larger class, it is

Resolved by 2,000 working people assembled in a mass meeting at the Grand Theater, that we call upon the mayor of Hartford to take immediate steps to find employment for the unemployed of this city.

The meeting was a historic event. The house was standing room only, jammed with 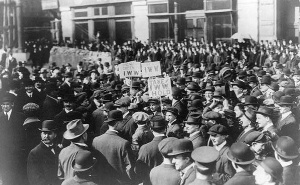 workers dressed in their Sunday clothes. They cheered the speakers who delivered their talks in Polish, Russian, and English. They responded enthusiastically to verbal jabs at the inflammatory news coverage the IWW had been receiving. As one organizer exclaimed, “we aren’t going to have any violence, even if the editor of the Hartford Courant wants it!”

Mayor Kinsella’s response to the meeting’s demand for employment was to announce that 300 jobs were available out of town at the Trout Brook Ice Company. The actual number of job openings, as well as the safety of working conditions at the plant, were disputed by others.

One speaker at the Grand Theater put the question succinctly. Michael Rosenberg, a veteran of the recent “great war” himself, spoke for more than just Hartford’s unemployed when it was his turn to address the crowd: “We say to President Wilson and to Congress: while this war was on, you appropriated billions for the war. How much are you willing to appropriate for peace and for jobs?”